After you spend the first 30 seconds of this product intro video rewinding and restarting the video, only to find out that the creator uploaded their main promotional content with the audio out of sync, you know the video is going to be top quality.

Then once the content starts, they waste no time in getting to the emotional appeal and making sure that you know where you stand as a man with a small penis: perpetually at risk of your partner chasing after someone else with a massive penis and cheating on you.

You know you’re dealing with professionals when you hear phrases such as “an unknown stranger with a huge dick was senselessly pounding the love of my life,” and “it was like a thunderbolt struck me through the neck.”

You know it is only going to get worse as you brace yourself for the next hour and a half of racist, colonizer fantasies as an obviously Serious Researcher Guy talks at you from an awful green screen with a blurry “lab” background.

Super Serious Researcher Guy goes on for what seems like days about how he found a tribe with a secret penis-growing ritual and how he not only participated in this ritual after gaining their trust but then took this knowledge back to his home country so he could make as much money as possible from it.

If you haven’t been put to sleep by his monotonous voice, driven mad by the bad A/V sync, or become hypnotized by his seemingly endless Monty Burns finger pyramid gestures, you then get to hear all sorts of ridiculous promises about “thermogenic” penis-expanding effects.

Thermogenic means to generate heat, and call me crazy, but telling people that you want to transform their pathetic little penis into some sort of fantastic jizz-spewing monster with a supplement that makes it generate heat, doesn’t fill me with confidence.

To top it all off, this clown spends the last 15 minutes or so, telling you all about how he could become a billionaire overnight by offering this supplement at $300 but that he’s not concerned with money, and he’s ultimately doing you a favor by making this supplement so cheap that even you can afford it.

You just have to act while the offer is up, which is conveniently tracked with a timer at the top of the page but don’t worry too much, even when the time is up they will still give you the “special deal” since they are obviously desperate for sales.

What is Ultra Boost Juice?

Whether this ritual works or even actually exists, we may never know, but one thing is for certain: if you want a bigger penis, Ultra Boost Juice is not the way to go.

How Does Ultra Boost Juice Work?

Penis size is largely dependent on the internal process of thermogenesis, which essentially means that higher core tissue temperature will increase blood flow to the tissue, causing it to constantly and consistently expand.

Each ingredient is supposed to work together to jumpstart the process of thermogenesis and penile growth by promoting blood flow to the penis, increasing the size of the internal penile chambers, and naturally increasing testosterone production.

The goal with all of this is to ultimately make the penis larger, give larger and longer-lasting erections, and increase your stamina and sex drive.

What Are Ultra Boost Juice’s Ingredients?

Mangosteen is an exotic fruit from tropical southeast Asia with a vaguely sweet and sour flavor with several health benefits including antioxidants, fiber, and a variety of nutrients.

Mangosteen is also a noted antioxidant, as well as an anti-inflammatory. (Source)

Malpighia emarginata is also known as the acerola cherry, and it is a small shrub that is native to southern Mexico and the Caribbean region.

Some of the benefits of acerola cherry include being incredibly rich in vitamin C, helping with digestion, being antifungal and antimicrobial, and boosting athletic endurance. (Source)

Also known as Siberian ginseng, though not related to other varieties of the same name, Eleuthero has long been used to improve the general health of individuals.

Consuming eleuthero as a supplement can boost the ability of the muscles to work, leading to longer physical workouts, and longer bedroom athletic sessions.

There are also the secondary benefits of blood sugar stabilization, helping to reduce reliance on insulin for some diabetics. (Source)

The primary benefit of ginseng is the anti-inflammatory properties, as well as the antioxidant levels.

Ginseng can also make blood sugar regulation more consistent for those with diabetes.

Turmeric root is a powerful all-natural ingredient that has been used for thousands of years to reduce inflammation and provide antioxidant properties in large amounts.

These properties have been used by people in India as part of medicine and cooking as one of the main spices.

There is also significant evidence to suggest that turmeric root has a role in reducing the occurrence or possibly severity of some mental issues like Alzheimer’s that can present in the elderly. (Source)

Ashwagandha has been used for centuries in ayurvedic medicine to supposedly help the aging body counteract many different illnesses and conditions, from stress to infertility and even brain damage.

Since it is adept at reducing stress, ashwagandha is also a perfect supplement to help mitigate some effects of anxiety.

The improved emotional and mental state of people who take ashwagandha as a supplement is often cited as anecdotal evidence that the substance is helping.

There has been research that also shows ashwagandha is effective in helping the body use oxygen more efficiently during exercise, making it a great supplement to help boost athletic performance both in the bedroom and outside of it.

The effects of ashwagandha on helping a man impregnate a woman have been well-known for many years, as ashwagandha can boost sperm count and quality in men with noted issues. (Source)

Included in the formula is an array of probiotic bacteria such as B. longum, L. Helveticus, L. acidophilus, and L. rhamnosus.

While they do not give much scientific reasoning beyond the shape, the formulation includes a large number of “penis plants” or plants that resemble penises.

These include the “Congo Penis Carrot”, the “Aboriginal Penis Beet”, the “Penis Banana”, and the “Zulu Penis Asparagus”.

While little information could be found about these plants, they are claimed by the manufacturer to be safe when consumed in supplement amounts.

Ashwagandha is known to occasionally cause relatively mild gastrointestinal upset symptoms, such as general stomach upset, vomiting, and diarrhea in mild cases, while rare severe reactions can lead to liver problems.

It is not recommended to take ashwagandha supplements for more than 3 months continuously, since the long-term safety of supplemental ashwagandha is not well-established.

If the poorly made video wasn’t enough evidence, the fake reviews help show you how legit this product isn’t.

Erectile dysfunction is one of the unfortunate things that come along with the aging process, and many of the natural supplements, including Ultra Boost Juice, are full of false claims and empty hope for men that are just looking to regain the stamina of their early 20’s.

How to Use Ultra Boost Juice

Ultra Boost Juice comes in powder form and you take one scoop daily.

Where Can You Buy Ultra Boost Juice?

Ultra Boost Juice can be found directly on their website.

Conclusion – Is it Worth Trying Ultra Boost Juice?

When it comes to spending money on sexual health supplements, there are a lot of choices out there, and after trying Ultra Boost Juice, we can tell you with confidence: try something else and don’t waste your money on the Ultra Boost Juice sham. 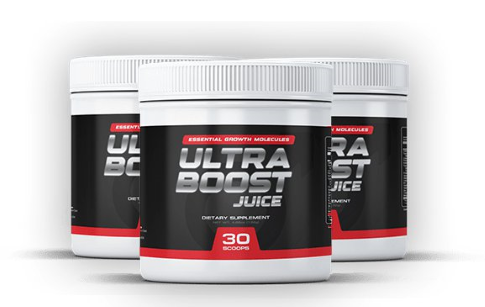 Check out our Ultimate Boost Juice review, and learn more about the ingredients in their pills, the potential adverse effects, and find out if it really works.