These days, you cannot even simply exist as a man without being bombarded online with ads for male enhancement products.

Whether they are offering boosted testosterone levels, enhanced bedroom stamina, or physical penile enhancement, they seem to come at you from every corner of the internet.

They make outrageous and borderline impossible claims, claims that if true, would be enough to change your sex life forever.

Sometimes there are catches but they generate results, sometimes they are just snake oil pills meant to generate some revenue, and sometimes, unbelievably, they can even do what they advertise.

That’s what we’re here to look at, we’re going to take a deep dive into Alpha Xtra Boost which its creator “Richard Johnson” says will help alleviate the symptoms of ED.

What is Alpha Xtra Boost?

It was created by a non-doctor, non-specialist, but somehow long-time researcher of erectile dysfunction named Richard Johnson.

How Does Alpha Xtra Boost Work?

Well, after scouring the little information that the manufacturer has online, we still aren’t entirely sure how it’s supposed to work.

In fact, the main page that tells you all about Alpha Xtra Boost reads less like someone selling a male supplement, and more like someone trying to get you to adopt their “clean living” mindset.

There are several ingredients that are touted to improve cardiovascular health and blood flow, so the mechanisms by which Alpha Xtra Boost is claimed to function are likely based on those effects.

What Are Alpha Xtra Boost’s Ingredients?

Kelp is known to have significant disease-fighting talents.

Not only is kelp incredibly rich in antioxidants, carotenoids, and flavonoids, but also in minerals like zinc and manganese, which are essential for combating the physical effects of stress and improve cardiovascular health, and fight cancer.

There is also some recent research to suggest that many sea vegetables can have a positive impact in the fights against colon cancers, osteoarthritis, and even lung cancer.

Kelp can even help lose weight by preventing the gut from absorbing some quantities of dietary fat. (Source)

Blessed thistle is a medicinal plant that has a history that stretches back to the Middle Ages, where the flowering tops and leaves were used to make treatments for the bubonic plague, and as religious health tonics for Christian monks.

Now, thistle is used in steeped tea preparations that may help with boosting appetite and settling indigestion, as well as bolstering the immune system against colds and coughs.

Thistle is also a significant anti-bacterial agent and can help reduce or eliminate bacterial infections, fevers, and even diarrhea.

It is a common skin treatment for afflictions like boils, ulcers, and open wounds, to make a thistle poultice that is used to soak gauze which is then used to cover the wound. (Source)

The essential oils contained in fennel contain a number of compounds that are recognized as anti-inflammatory agents and powerful antioxidants, that may help the body fight conditions such as obesity, cancer, diabetes, and even neurological conditions.

Fennel is often reported as able to help boost blood flow to the penis, often assumed to be from the significant benefits to the heart, cardiovascular system, which may help those suffering from erectile dysfunction or other sexual issues. (Source)

Also known as Angelica China, Dang Gui, Tang Kuei, Toki, and more, Dong Quai is a plant native to China, Japan, and Korea, whose root is used in medicine to treat a wide variety of conditions, unfortunately, science has so far failed to back up these claims.

There are reports that Dong Quai can help with arthritis and osteoarthritis, by preventing or reducing the breakdown of crucial cartilage. (Source)

This small rare herb is prized for its extracts, which have been used by cultures all across the American continents for herbal remedies, tribal supplements, and traditional natural medicines for many generations, due in no small part to the purported effects that it imparts to the user.

The small shrub is recognized by many native cultures as a potent natural libido enhancement supplement, as well as its ability to treat or reduce the effects of asthma, general anxiety, and even reduce depression. (Source)

The crucial ingredient in brewing beer and ale has been used medicinally for more than a millennia, being used to treat a wide range of health conditions.

Hops have been used to treat insomnia when consumed without alcohol, and not only helps sleep onset sooner but also helps reduce anxiety levels which can have a surprising effect on erection strength and stamina.

Hops may also help in the prevention of hardening of the arteries, leading to a lowered risk of stroke and heart attack. (Source)

Users should closely examine the ingredient list to evaluate any potential allergen issues or interactions with existing medications.

Kelp has been known to have higher levels of heavy metals like lead, cadmium, and arsenic depending on where and how it is sourced, which can lead to health issues when accumulated in the body.

Users of Dong Quai may experience a number of potentially adverse side effects, such as bloating, loss of appetite, diarrhea, increased light sensitivity, increased breast tissue in men, fever, elevated blood pressure, and even excessive bleeding.

With that said, all of the ingredients of Alpha Xtra Boost are supposedly safe to take in supplements, when taken according to the manufacturer’s directions.

Nobody under the age of 18 should use Alpha Xtra Boost, and just as with any new diet, exercise program, or supplement, you should not begin until you consult your doctor or another medical professional.

While the ingredients are claimed to be safe, they are not intended as a medical treatment for any disease or condition, and only a medical professional will be able to advise you if it is safe to ingest, with regard to your personal medical history and condition.

Most people are incredibly skeptical about men’s health supplements, particularly those that promise increases or improvements in “uniquely male” areas.

Maybe we have our sights set too high, but we think that supplements designed to combat erectile dysfunction should have effects that are noticeable within a few weeks at most.

This is why we were ultimately let down by Alpha Xtra Boost.

Many supplements are slow to start, but in nearly all cases some improvement is seen in the second and third months of taking them.

After the first month, we had not noticed any meaningful changes in performance ability, and even though we stayed hopeful, this trend continued for the duration of our three-month trial.

How to Use Alpha Xtra Boost

The instructions were simple enough, just take two pills per day with food.

It is important to take the pills with food to ensure that the ingredients become sufficiently emulsified so that they can be optimally absorbed.

Where Can You Buy Alpha Xtra Boost?

This means that you should not see Alpha Xtra Boost in online retailers or marketplaces, nor any brick and mortar stores.

This gives the product a much-needed air of exclusivity and legitimacy, which definitely fooled us.

There are packages with single bottles, for those who only want to try it for a month, or maybe want to give their initial bottle an additional month to deliver the effects they promise.

They also offer quantity packages of both three and six bottles each, with substantial discounts on a per bottle basis when bought in bulk.

But really, if one bottle isn’t enough, and three didn’t show us any results, what in the world would you want with six bottles?

Conclusion – Is it Worth Trying Alpha Xtra Boost?

If the name of the guy hawking these snake oil weiner pills, “Richard Johnson” wasn’t enough of a clue to stay away, here is our official recommendation to avoid wasting any of your hard-earned lettuce on Alpha Xtra Boost.

We gave it an honest shot, and plenty of time to deliver, and all we were left with is our same old problem, less money, and months of wasted hope. 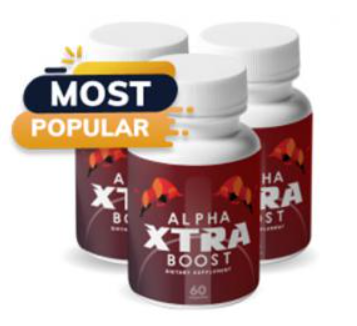 Alpha Xtra Boost makes a lot of claims, but do they back it up? Learn more about these pills in our in-depth review, and find out if it really works as well as they say it does.