Fatphobia in the United States is a real problem; fat people are more likely to get passed up for jobs than thinner people and their medical concerns are often brushed off as just a side effect of being overweight.

With these issues and so many more, fat individuals often choose to go to extreme measures to lose enough weight to be acceptable.

Crash diets, dangerous workout routines, and sketchy diet pills are just a few of the ways people can try to lose weight.

There are hundreds of diet pills and weight loss supplements on the market; every health food store and vitamin aisle sells fat burner supplements that are meant to help boost weight loss.

Unfortunately, not all diet pills that you can find are safe.

In the United States, the Food and Drug Administration oversees the approval and distribution of medications, but they do not endorse the use or distribution of Redotex.

While you may have heard of plenty of people that have managed to lose weight while taking Redotex, it causes a lot of side effects that can seriously impact your life.

We’re going to take a closer look at Redotex and see exactly why you will want to avoid it, even if nothing else has worked for you.

Redotex is a Mexican stimulant diet pill that claims to help you lose up to 6 pounds of fat every week.

This may sound great, but like with many things, these claims are certainly too good to be true.

Introduced in the 1980’s, Redotex has been a popular weight loss drug, prescribed to thousands of people over the years.

In the decades since its introduction, many patients have reported severe side effects, such as depression, addiction, high blood pressure, and excessive diarrhea,

While you may be enticed by hearing you could lose more than 5 pounds in a week, there are some glaring red flags that are trying to tell you to avoid Redotex altogether.

Redotex is a weight loss pill that works as a thyroid booster, laxative, and stimulant, all qualities that work together to help the user lose weight.

The downside to this is that there is no single company that claims to own the drug, there is no official website, and it has been banned in the United States.

After the United States stopped allowing Redotex to be prescribed here, patients flocked to the southern border of the country, doing everything that could to get an appointment at one of the offices just on the other side of the U.S./Mexico boundary.

This led to limits on the number of patients that were even allowed to cross the border and obtain a prescription.

Nowadays, finding Redotex is extremely hard, and for good reason.

How Does Redotex Work?

A prescription stimulant from Mexico, Redotex is a combination of several ingredients that work together to promote weight loss in different ways; these ingredients include:

If you are one of the individuals that are lucky enough to take Redotex and avoid the side effects, you may see some weight loss.

The main benefits of using Redotex are that it:

These results sound great, but when you realize that a lot of the weight loss and detox is due to the severe diarrhea and increased urination, you may want to try a different weight loss product.

Norpseudoephedrine is added to Redotex as an appetite suppressant.

Considered a Schedule III drug in the eyes of U.S. law, this psycho-stimulant is a member of the amphetamine family.

Highly addictive, amphetamines are best to be avoided unless you don’t have other options.

Also known as barbaloin, aloin is a bitter substance derived from the aloe plant.

This provides the anthraquinones, which give the ingredient its laxative properties.

This ingredient has been discovered to promote weight loss and overall well-being in those that have been diagnosed with hypothalamic obesity.

Unfortunately, this is one of the ingredients that does pose a risk for dependency and addiction.

There are several clinical applications for atropine sulfate, such as support for the respiratory and circulatory systems.

Due to it being banned in various places, the lack of evidence supporting successful weight loss, and the fact that there are several dangerous side effects, Redotex is not a weight loss supplement that works.

There are attributes to it that can make people lose weight, but because of how dangerous it is, this is not something that we can recommend in good conscience.

Not every patient that uses Redotex has a terrible experience, and there are definitely some pros and cons that come with using this medication.

How to Use Redotex

Adding to the long list of red flags and reasons to avoid Redotex, one of the many mysteries about this drug is how exactly it should be taken.

There is no information available about the dosage that should be taken, which may be one of the factors that lead to negative side effects from the drug.

Whether you should be taking one pill per day or six pills per day, it is important to know what to expect and how to take it so you don’t accidentally overdose, as the ingredients can cause serious side effects.

Where Can You Buy Redotex?

As we discussed previously, Redotex is banned here and they do not have an official website.

If you are still interested in buying Redotex even after hearing about how many things can go wrong, you will need to book an international vacation, as most health agencies and organizations, the United States included, have completely banned the sale and distribution of Redotex.

Be aware that since Redotex also contains diazepam, which is a controlled substance, if you do attempt to source it from vendors outside the US, you may be committing a crime by bringing it across the international borders.

As it is still manufactured in Mexico, you are able to visit the country for a prescription, otherwise, the only other potential place to find it would be a Chinese website or reseller.

Conclusion – Is it Worth Trying Redotex?

If you are shopping for supplements to help you burn more fat or lose larger amounts of weight faster than normal, you are going to have to make a lot of challenging decisions regarding your desire to live in a different body without putting in the honest effort it will require, and your risk tolerance for potentially dangerous and even deadly side effects.

There are hundreds and perhaps even thousands of potentially effective weight loss supplements on the market both domestically and internationally, and generally speaking, the vast majority of them represent no serious danger or risk to your health, even when taken in excess of the recommended dosage, but Redotex is certainly an exception to this.

Even if it was the magic bullet that could kill all of your extra, unwanted pounds without any extra effort, lifestyle changes, or commitments on your end, would you still be willing to take it, knowing that it may kill you?

That is one of the major reasons why we cannot recommend strongly enough that you avoid Redotex at all costs, not only can it potentially kill you but since it has already been banned in the US, if something terrible were to happen you would not be protected in any legal sense.

If you happen to be in a situation, perhaps on a vacation in Mexico where supposedly Redotex is still available, remember this article and the dangers of taking Redotex, and give that trash a wide berth.

There are so many other supplements out there that will give you better results, for less money, in a product that is 100x easier to get since it isn’t banned by the FDA, that there is no reason for us to ever recommend this garbage or for you to ever waste your money and time on it.

If you’re looking for the best weight loss supplement, look no further than Instant Knockout.

It’s by far the best fat burner on the market, click here to read my review. 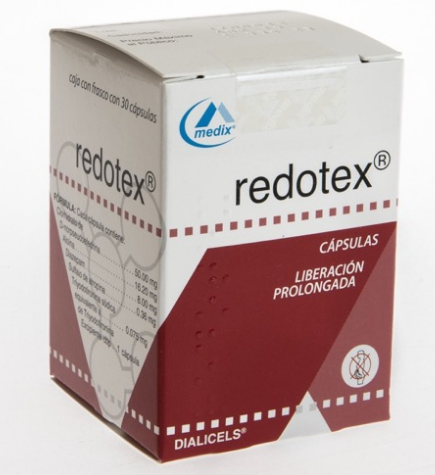 Redotex is a weight loss pill that apparently works by burning fat stores, but does it really work? Learn more about whether or not it works here.