Peptides have been used extensively in the development of cancer treatments since they can help to target tumors while minimizing side effects on healthy tissue.

The focus of todays review is none other then a peptide called TB-500.

This peptide is one of the more popular ones, and for good reason: it works.

Learn more about TB-500 in our exclusive review below.

It’s a naturally occurring peptide that is often used by athletes and bodybuilders to promote faster healing of injuries.

This peptide is well-researched and has been shown to have numerous beneficial effects on the body.

TB-500 is a synthetic version of the protein thymosin beta-4, found in virtually all human and animal cells.1

Thymosin beta-4 is a crucial regulator of cell proliferation, migration, and differentiation.

It also plays a vital role in wound healing and tissue regeneration.2

As a result, it has a wide range of potential applications in medicine.

For example, it is being investigated to treat heart disease, stroke, and diabetes. It may also have potential as a cancer treatment, as well as anti-aging regenerative therapies.3

TB500 is still in the early stages of development, but it shows promise as a safe and effective way to promote tissue growth and repair.

Many people use TB-500 to speed up the recovery process after intense workouts or injuries.4

While its effects can vary from person to person, many users report experiencing significant improvements in muscle tone and strength after using this supplement regularly.

TB500 has been shown to promote the growth of new blood vessels, nerves, and muscles.

It also helps to repair damaged tissue and reduce inflammation.

Some people take TB-500 as a more significant health and fitness routine to support muscle recovery after strenuous workouts or intense athletic training.

Others use it for various health and wellness purposes, such as reducing inflammation or promoting healthy skin and hair growth.

Overall, TB-500 offers many powerful benefits for anyone who wants to boost their performance in sports or simply enjoy better overall health.

Some of the critical benefits include improving muscle growth, promoting better stamina during workouts, and accelerating recovery times after injury or surgery.

Furthermore, TB-500 can also help to boost overall immunity and reduce inflammation throughout the body.

The below video from Dr. McClain does a good job explaining the benefits of TB-500 below:

TB-500 is a potent peptide with a wide range of uses in the body.

This bioactive compound is typically delivered through injection, where it acts on various factors in the body to promote healing and tissue regeneration.

One of the primary functions of TB-500 is to activate receptors in cells known as integrins, which are involved in cell signaling and migration.

Through this mechanism, it can support the repair and regrowth of damaged tissue by enhancing the ability of cells to move to the areas where they are needed most.

Additionally, TB-500 is also involved in activating pathways for protein synthesis, helping to trigger growth and development throughout the body.

Overall, these complex functions make TB-500 a highly effective tool for promoting healing and regeneration in many different contexts.

While TB-500 is generally considered safe, a few potential side effects should be considered.

The most common side effect is mild injection site reactions, such as redness, itchiness, or swelling.

In rare cases, TB-500 may also cause headaches or nausea. Overall, however, the side effects of TB-500 are typically minor and temporary.

While it’s generally well-tolerated, some users may experience side effects such as nausea or fatigue.

More severe side effects such as blurred vision or chest pain have been reported in rare cases.

If you experience any adverse reactions while taking TB-500, it is vital to stop using the peptide and consult a medical professional.

There are a number of very positive reviews of TB-500 discussing their before and after results.

“I tore my rotator cuff tendon partially bad enough that I literally couldn’t move my arm, spent a month not able to use my arm, worked up to like 5lb curls that hurt and being able to hold a pillow against a wall putting pressure with my lateral delts. Got TB 500 and bpc, within 2 days of the tb500 I could fall asleep without pain and each subsequent shot I could almost feel the healing immediately.” –XelentGamer/reddit.com

“I’ve used it for a shoulder injury. It’s pretty expensive, but I felt like it worked. I used it in tandem with BPC though which I know definitely works, so couldn’t isolate the effects.” –TheSmallFriend / reddit.com

According to reports from users and researchers across the globe, TB-500 appears to have little, if any, significant harmful side effects.

More anecdotal comments from users who share their experience with results after taking TB-500.

While personal anecdotes should not be taken as hard scientific proof, it is nonetheless interesting to see what others have experienced with this supplement.

Generally speaking, dosing size will typically vary between 500mcg and 1000mcg at 1-3 times per day.

Some people stack TB-500 with other types of supplements or drugs to amplify its effects or get better results more quickly.

Common examples include using TB-500 alongside steroids or peptides like trenbolone or L-Dopa.

There is no one “right” way to use this particular peptide, so it’s best to experiment and find the dosing schedule and size that works best for you.

To stack TB-500 with other peptides, it is crucial to consider the dosing schedule and dosing size.

It is generally recommended that you start with a smaller dosing size and work your way up as needed.

You will also want to determine which mode of administration works best for you, whether via injections or sublingual dosing.

Depending on your goals, you may stack TB-500 with other peptides such as at different dosing frequencies and dosing size combinations.

Ultimately, how you choose to stack TB-500 will depend on your individual needs and preferences, so do some research and be sure to consult a medical professional before starting any new supplementation routine.

While a lot of companies sell peptides, we personally recommend the Biotech Peptides brand.

Biotech Peptides has 1 variant available, 2 mg bottles that sell for $30 a piece.

They offer free shipping on all orders over $100, so you can be sure you’re getting the best deal possible.

They also have a no questions asked money back guarantee, so you can feel confident in your purchase.

Payment can be made via Paypal or Cryptocurrency, and all orders are backed by a 100% satisfaction guarantee.

Lastly, all of their peptides (including TB-500) have a certificate of analysis which proves you’re actually getting the real deal.

If you’re looking for a high-quality, affordable peptide supplement, then TB-500 from Biotech Peptides is a perfect choice.

There’s plenty of proof that TB-500 does what it says it will, and in some cases much more.

As with any peptide, it’s a good idea to keep a log of your results so you can track your progress.

Be sure to come back and leave a comment when you start getting great effects. 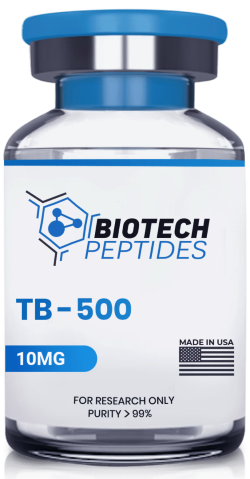 Learn more about the benefits of TB-500 peptide, as well as potential side effects, dosage protocol, user results, and more.